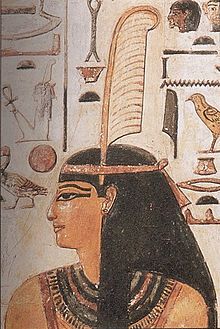 Maat, also known as Ma’at or Mayet, was a female goddess in the ancient Egyptian religion who represented truth, justice, balance and morality.  The daughter of the Egyptian sun deity Ra and wife of the moon god Thoth, she served a kind of spirit of justice to the Egyptians.  She decided whether a person would successfully reach the afterlife, by weighing their soul against her feather of truth, and was the personification of the cosmic order and a representation of the stability of the universe.  The earliest writings where she is mentioned date back to the Old Kingdom of Egypt more than 2,300 years ago.

The Egyptian culture was centered on order, everything had its due place in the world.  This included religion, society and seasonal changes.  The goddesses Ma’at came to represent the concept of balance and order because many Egyptians needed to explain the world around them.  She was the one that kept the stars in motion, the seasons changing and the maintaining of the order of Heaven and Earth.  The opposing force of this was known in ancient terms as “isfet” or chaos.  Ancient Egyptians considered the desert beyond the Nile River to be chaotic; whereas, the area close to the Nile was considered orderly. Together, these two forces brought balance to the world in which they lived and was an important part of everyday Egyptian life.

Ma’at is usually depicted in the form of a woman seated or standing with outstretched wings attached to both her arms.  In other instances she is seen holding a scepter in one hand and an ankh (the symbol of life) in the other.  Her statue was a stone platform depicting a stable foundation on which order was built.  A common symbol associated with her is an ostrich feather, which she is almost always shown as wearing in her hair.  Often, the Feather of Ma’at was a distinctive feature of her headdress.  Less frequently images of the goddess showed her without a head, instead replaced by the feather.  In other images the feather alone conveyed her presence.  This feather has come to symbolize her being, as well as the representation of balance and order, it became a hieroglyph for “truth.”

Wall relief of Maat in the eastern upstairs part of the temple of Edfu, Egypt. The ostrich feather can be seen on top of her head.

Ma’at was associated with the law in ancient Egypt.  From the 5th dynasty (c. 2510-2370 BC) onwards, the Vizier responsible for justice was called the Priest of Maat and in later periods judges wore images of her.  The ‘Spirit of Maat’ was embodied by the chief judge in charge of the Egyptian law courts.  He had a dual role, serving as both a priest and working directly in the law courts and justice system. The “Priest of Ma’at” began court hearings whilst wearing the feather of Ma’at and all other court officials wore small golden images of the goddess as a sign of their judicial authority, also as a symbol that their judgement would be balanced and fair.  Priests drew the Feather of Ma’at on their tongues with green dye, so that the words they spoke were truth.  The priest would rule on the earthly punishment according to the nature of the law that had been broken. Punishments included imposing fines, corporal punishment and in extreme cases capital punishment.  It was considered a crime against Ma’at if a person engaged in jealousy, dishonesty, gluttony, laziness, injustice, and ungratefulness.  The guilty Egyptian was deemed to have violated the Spirit of Ma’at and would face a further judgment in the Underworld during the ceremony of justification in the Hall of the Two Truths. The ‘Spirit of Ma’at’ detailed in the wisdom literature contained practical guidance with examples and some rules applied in previous law cases. These kinds of instructional texts have been described as “Ma’at Literature”.

Excerpt from the ‘Book of the Dead’, written on papyrus and showing the “Weighing of the Heart” using the feather of Maat as the measure for the counter-balance. Created by an unknown artist C.1300 BC

Heliopolis-era creation stories from the Kemet people report that in the beginning Atum emerged from the Isfet (chaos) of Nu (primordial waters). Atum created the god Shu (personification of air/cool dryness) and goddess Tefnut (personification of moisture) from Nu. Shu is depicted in the Kemet iconography as an ostrich feather.

Under Kemet cosmology, Maat is designed to avert chaos (Isfet) and maintain truth (Maat). The symbol for truth, justice, balance, and order is the Goddess Maat. The iconography for Maat in the hieroglyphs depict the single ostrich feather (Shu), worn atop Goddess Maat’s head.

During the reign of Pharaoh Menes, around 2925 B.C.E., after the unification of upper and lower Kemet, archaeological finds evidence administration of the 42 Laws of Maat among the Kemet people as deduced from Kemet coffin texts or funerary papyri dating from this period.

The Duat, the Hall of Two Truths, and the Weighing the Ka (Heart)

The duat (underworld as the place for judgment) is where the popular Kemet funerary scene of the Hall of Two Truths is depicted in the various versions of the “Egyptian Book of the Dead: The Papyrus of Ani,” edited by E.A. Wallis Budge. A closer interpretation of the title from the Kemet language is said to be “Book of Coming Forth by Day.” The Budge translation was a funerary text written for the “coming forth” of Kemet scribe Ani.

In Chapter 30B of The Papyrus of Ani entitled “Chapter for Not Letting Ani’s Heart Create Opposition Against Him, in the Gods’ Domain,” we see the deceased scribe standing before his own heart/soul (ka) on the scale of Maat. On the opposite scale is the Goddess Maat’s feather of truth (Shu). The head of the Goddess Maat is depicted atop the scales of justice. Thoth, also known by other names such as Tehuti, stands holding a tablet and a writing tool to record the results from the scales. The ibis-headed Thoth is the patron saint of Maat scribes and priests.

Petitioner Announces the 42 Divine Principles of the Maat

In Chapter 125 of The Papyrus of Ani, we find the petitioner led by Anubis into duat and pronouncing his/her 42 affirmative declarations, listed below from Budge’s public domain translation of the 42 Divine Principles of Maat:

After the petitioner’s testimony containing the 42 affirmative declarations, the weighing of the ka for truth, and the reading of the scales, it is said that the doer of Maat is administered Maat. If the petitioner is deemed by the Goddess Maat to be in substantial compliance with the 42 Laws of Maat the petitioner passes from duat to the Field of Reeds (Arus) where Osiris sits as the final gatekeeper.

The Book of the Dead is a collection of funerary texts and spells from ancient Egypt designed to assist a person’s journey through the underworld, into the afterlife.  Without these spells, it was believed a person could not proceed.  In the book is a spell called the “Forty-Two Declarations of Purity” or the “Negative Confessions”.  This spell is comprised of confessions the tomb owner believed he committed throughout his life.  It was believed that any crimes committed against Ma’at should be written down as they could easily be forgiven.  In the Hall of Ma’at is where the judgement of the dead was performed in which Ma’at played an important role.  The ceremony, called the “Judgment of Osiris,” was named after Osiris, the god of the dead.  When the dead were judged, it was the feather of Ma’at that their hearts were weighed against.  If a balanced scale was struck, the deceased was deemed worthy to meet Osiris in Paradise.  The weightlessness of their hearts indicated that their souls were not burdened with sin and evil.  If the heart of the deceased was found to be heavier than the feather of Ma’at, it would be devoured by Ammit, the soul-eating monster depicted with the head of a crocodile, the forequarters of a lion and the hindquarters of a hippopotamus.  Other gods in the judgement hall who were part of the tribunal overseeing the weighing of the heart were also pictured holding a feather but the scales always represented Ma ́at.

Ancient Egyptians worshipped many gods, one was certainly Ma’at, although Egyptian archaeologists now believe she was perhaps more of a concept or an ideal.  It’s reasonable to assume her principles aided the people of Egypt in being better individuals and that she could be compared to the conscience of a person.  There was a small temple dedicated to Ma’at by Hatshepsut, the fifth pharaoh of the Eighteenth dynasty of Egypt, Egypt’s first female pharaoh, at the Karnak temple complex in Luxor Egypt.  Largely in ruins, it still preserves inscriptions of some of the viziers of Ramesses III and XI. A previous Ma’at temple existed in this area, indicated by reliefs and stelae belonging to the reign of Amenhotep III.  The temple is inside the Precinct of Montu, the smallest of three enclosures at Ipet-Isut.

Featured Image: This artwork, realized in 1998 by the Veronese painter Davide Tonato, is an interpretation of the traditional attributes of Maat, Egyptian Goddess of the justice.

“Maxims of Good Discourse” writings of the notable Kemet vizier and scribe Ptah-Hotep (accounting of some procedural laws under Maat).

NaturesGuide will be your number one guide to naturality, connecting humans with nature. Our website will show you how you can begin to engage in more simpler lifestyle practices and essentially putting health and wellness at the forefront of everyone's life through proper dieting, exercising and leisuring (fun sessions). View more posts